The Arctic Ocean system (Fig. 1) has featured multi-year sea ice, persisting year-round, for as long as 800,000 years (Overpeck et al. 2005) and possibly even over millions of years (Stickley et al. 2009). Oceanography and meteorology of the Arctic Ocean directly influence natural ecosystems and the adjacent indigenous populations in the surrounding coastal states of Norway, Denmark/Greenland, Canada, United States, Russian Federation, and Iceland as well as the non-coastal Arctic states of Sweden and Finland. The Arctic Ocean system has changed with urgent consequences reverberating within and beyond the high north.

Within our lifetime, the Arctic Ocean has transformed with its permanent sea-ice boundary becoming a seasonally ice-free sea. We can see that the Arctic system already has crossed the threshold with more than 50% of the sea-ice newly forming each year (see video), spiraling to its minimum extent (NSIDC 2012) and volume (PIOMAS 2012) on record in August 2012. Moreover, there is summer open water and winter first-year sea ice from the Bering Strait to the Barents Sea, opening the Northern Sea Route to rapidly increasing transpolar commerce (Bunik and Mikhaylichenko 2012). More broadly, new summer open- water areas are stimulating energy exploration and development (Blaauw 2012) as well as expanding fisheries and ship-borne tourism with impacts on communities, especially indigenous peoples’ around the Arctic Ocean (Arctic Transform 2009).

The Arctic Ocean is experiencing an environmental state-change in which the boundary conditions and dynamics of the system are being replaced much faster than forecast in climate models (Scheffer et al. 2001). In fact, the Arctic Ocean is undergoing the largest environmental state-change on Earth. The fundamental shift in the sea-surface boundary of the Arctic Ocean is creating a new natural system with different dynamics than anything previously experienced by humans in the region. These shifts are inherently introducing risks of political, economic and cultural instabilities. Such instabilities will require resources in an unplanned manner or at the expense of previously prioritized activities. These resources could be financial, diplomatic, or intellectual capital as well as tangible assets that are relevant to the security and welfare of the governments and the human populations that they represent (Berkman 2010). 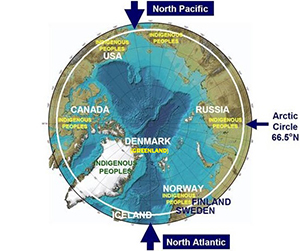